A Simple Guide to Palm Reading 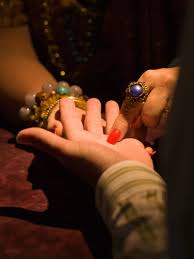 Are you curious about what your palm says about you?

Palm Reading is also called Palmistry or Chiromancy (meaning hand prediction). It is an analysis of a person’s hand to foretell the future and personalities. It has been used for centuries in different cultures, and there are many variations of the interpretation. This site’s reading is based on Chinese origin.

Since the tradition of palm reading, also known as chiromancy, dates back through many millennia to several different cultural traditions, there are many variations in palmistry methods. All methods, however, involve the same fundamental practice of examining the lines that crisscross the palm of the hand and interpreting their meanings.

When doing readings, most palm readers look to the non-dominant hand for insight into the characteristics an individual was born with and their personal gifts and challenges, and at the dominant hand to learn about the individual’s past, future and choices. Some palm readers, however, look to the left hand to interpret the individual’s past and their inborn character traits, and to the right hand for insight into their life experiences, including education and relationships with others.

This line reveals insight into an individual’s emotional life, including their love relationships. Beginning at the outer edge of the palm, below the pinkie finger, the heart line extends horizontally across the upper portion of the palm, ending beneath either the middle or index finger.

A Heart Line marked with tiny circles or crosses (referred to as “griddled” or “chained”) indicates an individual who suffers from anxiety. He or she is likely to be sensitive, temperamental and highly creative, with emotions that are felt deeply and passionately.

This line signifies an individual’s intellectual life, including how they learn and communicate. Beginning at the inner edge of the palm, between the thumb and index finger, the Head Line runs below the Heart Line, extending horizontally across the palm toward the outer edge.

When the Head Line is long and deeply grooved, this indicates an individual whose thinking is sharp and focused. A short line shows a person who is more of a doer than a thinker. If the line is straight, it indicates someone who is grounded and realistic in their thinking, while a curvy or sloping line reveals a more creative thinker. Finally, a wavy or broken Head Line indicates someone who is easily distracted or frequently changes their mind.

Note that in individuals with a single palmar crease, that line is interpreted as both the Heart and Head Lines.

This line reveals an individual’s physical health and vitality. It can indicate major life events, including illnesses, injuries, moves to a new location, or traumatic experiences. Often, but not always, joined with the Head Line, the Life Line runs from the palm’s inner edge, starting between the thumb and index finger and extending down the center of the palm toward the wrist.

A long and deeply grooved Life Line indicates an individual who is vigorously healthy. A short, shallow Life Line reveals someone who might easily fall under the sway of more dominant personalities. A Life Line that swoops down in an arc shows an enthusiastic, active person. A straight Life Line that runs closer to the thumb, on the other hand, reveals an individual who tends to have lower energy and who may be rather reserved with others. A break or fork in the Life Line can indicate a sudden and significant change in the person’s life.

This line, also known as the Line of Destiny, is not always present on an individual’s palm. When it is, it reveals the obstacles, decisions, difficulties and successes the individual will encounter along their life path. Beginning at the base of the palm, next to the wrist, the Fate Line runs upward, extending across the center of the palm in the direction of the index or middle finger. 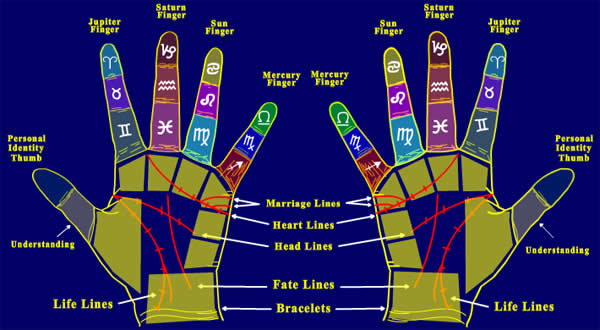 The Elements in Palmistry

Along with the lines that crisscross the palm, a palm reader can also interpret the shape of the fingers and the palm itself to gain further information. These shapes fall into four categories that are consistent with the four Elements in astrology: Fire, Earth, Air and Water.

Compact hands with square-shaped palms that measure longer, wrist-to-fingers, than the length of the fingers themselves are referred to as Fire Hands. People with Fire Hands can have hot tempers, and are full of energy and spontaneity. They may be inconsiderate toward others.

When the fingers are about the same length as their square, broad palms, these are said to be Earth Hands. These individuals tend to be hardworking and practical. They can also be stubborn, and they are firmly grounded in their values.

Individuals with fingers that measure longer than their square or rectangular palms are said to have Air Hands. They are witty and intellectual, talkative and gregarious.

Individuals with fingers that measure longer than their narrow, oval-shaped palms are said to have Water Hands. These people are emotional and can tune in intuitively to others’ feelings. They may tend to have unpredictable moods. 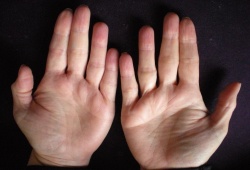 Most people do not have identical lines and creases on their right and left palms. So, which hand should be used? In general, both hands have imbedded messages for you to uncover. However, to be more accurate in the reading, follow the special “age and gender rule” below:

There is another saying that a man’s left hand represents what he was born with physically and materially, including his family and heritage, and his right hand represents what he becomes after grown up, including relationship, health, social status, etc. For a woman, it is the opposite hand, that is, right hand for “born to be” and left hand for “grown to be”. This interpretation coincides with the special “age and gender rule” mentioned above. Typically, a person is heavily influenced by his parents, family heritage, and upbringing environment from birth through his young adulthood. Gradually after his independence, he is a man of his own doing and destiny. Therefore, using age 30 as a milestone to switch hand for the analysis will increase the accuracy. As to using opposite hands for man and woman, it is based on the Taoism’s principle of Ying (woman) and Yang (man). 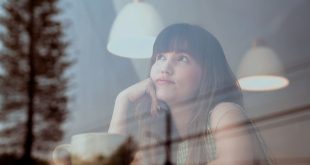 Getting Rid of Karmic Blocks

Karmic blocks can bring bad luck to your life. When you feel that you have …